Have you ever found yourself trapped against the opponent team who effectively uses the shake and bake strategy to effortlessly score points? Or you might have seen this pickleball move used by advanced players in tournaments.

Shake and bake is a pickleball strategy mostly used by players who prefer an aggressive style of play.

If you don’t know what shake and bake in pickleball is, but want to learn how to use it in your next game, you’re at the right place. In this guide, we’ll explore all about the shake and bake strategy and how you can use it or defend against players who apply it.

Moreover, we’ll provide additional tips and tricks so that you can master this pickleball maneuver.

What Is Shake and Bake in Pickleball?

Shake and bake is a doubles strategy in pickleball, in which one partner of the serving team (shaker) forcefully drives the third shot. Meanwhile, the other partner (baker) crashes to the pickleball net to counter the return shot from the opponent. The forcefully driven third shot results in a bad pop-up from the opponent, and they end up returning a weak and high shot toward the serving team. The crashing player effectively tackles this weak shot and finishes the point.

To beginner players, the concept of shake and bake might seem confusing and intimidating. Many players hesitate to execute this powerful strategy simply because they don’t know how it works. So let’s break the steps down and analyze them in detail.

Before using the shake and bake strategy, it is essential to make sure each player in a team knows what their role is. This means communication is vital to the effective execution of shake and bake, otherwise, it will end in failure.

Firstly, the serving team serves the ball, which is returned by the opponent. Then, the player on the serving team who can drive the ball with great force drives the third shot with maximum power. The ball should be aimed for a spot on the opponent’s court where they can’t reach it easily. The tactic behind this is to force the opponent into returning a soft, high shot. The player who drives the shot is called the shaker.

While the shaker drives the ball, his partner quickly runs to the net without sparing time. His job is to counter the expected weak shot from the opponent and finish the game by smashing the ball at the opponent or aiming it where they can’t reach it. This step catches the opponent off guard and the serving team wins a point. The player who runs to the net to smash the fifth shot is called the baker.

It is important for the shaker to have better control and power, while the baker should be fast and have good footwork to reach the non-volley zone in time.

Why Should You Use Shake And Bake?

Shake and bake is an effective pickleball maneuver that quickly lets you win a point. Even if the opponent is able to neutralize your shake and bake, you still manage to pressurize them into a defensive position while your team assumes the attack position. This gives your team an edge over the opponent team. Shake and bake is particularly useful when the opponent tends to hit short and weak return-of-serves. This provides the needed time for the serving team to drive the third shot with immense force.

So, if you want to become a pickleball pro, it’s shake and bake is a must-have strategy.

How To Effectively Shake And Bake In Pickleball?

Mastering the skill of shake and bake in pickleball certainly requires practice and good communication with the partner. But once learned properly and executed perfectly, this strategy turns out to be a great game changer.

Make sure to keep the following points in mind while performing the shake and bake.

The success of your shake and bake strategy greatly depends upon the quality of the third shot. Make sure to hit a high-quality third shot that is delivered with immense force and is low over the pickleball net. Hitting a bad quality third shot that is either not forceful or is high above the net will be easily countered by the opponent and returned as a powerful shot. This will most likely be aimed at the crashing player who will find himself in a challenging position.

Focus On The Placement Of The Third Shot

Apart from ensuring a forceful third shot drive also make sure that it lands in a strategic position on the opposing team’s side of the court. A few important points need to be kept in mind regarding the placement of the third shot.

Firstly, make sure the third shot is driven low over the net. This is because a high shot is easy to tackle and results in an aggressive return shot from the opponent. Secondly, try to hit the third shot at the player who is not good at handling pace.

Moreover, aim for the backhand side or some other awkward position like the shoulder of the opposing player. Such a shot, when delivered with pace, will be difficult to handle and result in a pop-up on the fourth shot which will be easily smashed back by the crashing player. Also, if your opponents tend to stack and switch a lot, it is a good idea to hit the third shot to the player who is in motion. This is because running players have a greater chance of making errors than stationary players.

Before executing the shake and bake strategy in pickleball, each player should be aware of his role. This means that the shaker should know that he has to drive the third shot, and the baker should know when to crash toward the net. As forehand shots are much stronger than backhand shots, the crashing player should try to use the forehand to hit the last shot.

Rush To The Non-Volley Zone

If you are the crashing player, you must dash to the kitchen line as soon as your partner drives the third shot. This is because if the crashing player makes a delay, he will be in an unfavorable position to handle the shot. Being slow might also give the opponent an advantage to hit the shot on an unreachable spot on your side of the court. So be quick to reach the kitchen line and be in a good position and hold the pickleball paddle at the net properly to hit the last winning shot.

However, while crashing towards the non-volley zone if you notice that our partner hit a poor third shot then don’t rush forward. In this case, you must stay far back to tackle the aggressive return shot from the opponent.

Communication Is the Key

Effective communication before and during the game is vital to ensure a successful shake and bake. Before the game, you must decide with your partner the game strategy and who will deliver the third shot, and who will take the crashing role. Communicating during the game is equally important. If you are the shaker, and you deliver a poor third shot, you must alert your partner not to crash to the kitchen line. This will eliminate confusion and ensure a smooth game for your team.

You can also use some pickleball hand signals when executing the shake and bake strategy to alert your partner.

How To Defend Against Shake And Bake?

Now that you know how to successfully execute the shake and bake technique, let’s find out how to defend against it. If you are playing against players who frequently shake and bake, you need to know how to counter it and not lose your nerve under pressure.

Read on to find out how to effectively diffuse the shake and bake strategy of your opponent.

Hit A High-Quality Return Of Serve

The opposing team’s ability to drive the third shot greatly depends on the quality of the return of serve. If it is weak and high, it will be easily driven back. But if it is deep near the baseline and low over the net, your opponent will find it hard to return it as a forceful third shot. Therefore, try to hit a quality return of serve with ample force and the right amplitude.

Apart from this, try to deliver the return of serve smartly in terms of placement. This means that you should aim for the opposing player who has a weaker third-shot drive and will not be able to drive the third shot effectively. Another tactful move will be to aim the return of serve toward the player who is likely to crash the net. This will keep that player far from the net and effectively diffuse the shake and bake.

The opposing team’s winning shot is the bake part of shake and bake, and it greatly depends on your fourth shot. When shot strategically, it can effectively neutralize the bake. To do this, hit the fourth shot down at your opponent’s feet. By doing so, your opponents won’t be able to hit the fifth shot properly, as they did not receive the expected pop-up on the fourth shot.

Shake and bake is a useful strategy in pickleball that if mastered can help elevate your game. It is mostly used in a doubles game, with one partner driving the third shot and the other crashing to the net to score a point. The success of this strategy relies on effective communication and the individual skill of the teammates. Apart from knowing how to implement this technique, you should also be able to defend against it. 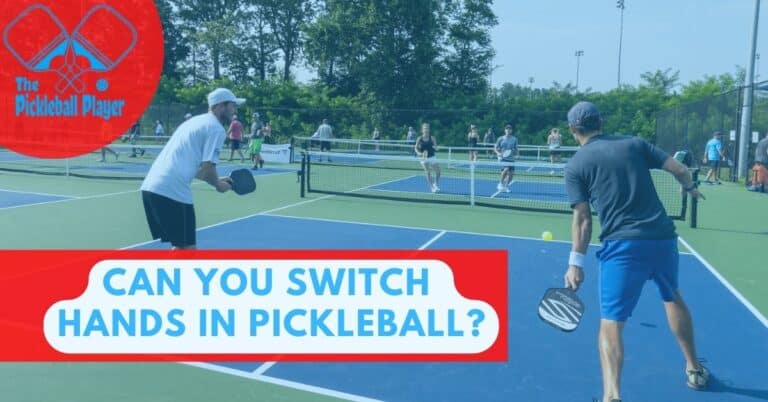 One of the most debated questions that frequently gets asked by pickleball players is, “Can you switch hands in pickleball?” Different pickleball players offer different opinions regarding this question. While this technique doesn’t sit right with a few players, many others seem to be quite fond of it and use it as a way of… Do you ever feel stuck in the same side and position in a pickleball game, especially while playing doubles? It’s not very pleasant not being able to help your partner or use your full potential. That’s where stacking comes in. According to the Oxford Dictionary, stacking is a neat arrangement of things in a pile…